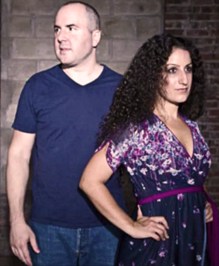 Keith and The Girl is a free comedy talk show hosted by Keith Malley and Chemda. Topics include current events, pop culture, politics and even intimate details of their lives.

They create a new hour-long show each weekday and make it available on this site and on iTunes. Subscribe to the free podcast and have new episodes downloaded automatically.

Every show is guaranteed to make you laugh!